Employer’s finding of resignation letter is not notice to quit 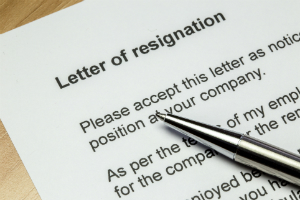 Even though an employer found a signed resignation letter in an envelope addressed to him on top of an employee’s desk, the employee had not given notice to quit her job, a Fairfax Circuit judge has ruled.

In this case, the employer accepted the resignation and terminated the woman immediately. That action prompted a lengthy fight over whether she actually had quit and whether she was subject to a statutory cap on unemployment benefits and an overpayment claim.

Fairfax Circuit Judge Jan L. Brodie brought the controver­sy to an end, though, ruling that the plain meaning of “given notice” in the Virginia Code requires an affirmative act on the part of the employee.

The woman could receive unemployment, she ruled in Har­vey v. Virginia Employment Comm’n.

The dispute started in early 2015, when Darlene Harvey, a bookkeeper for an accounting firm, saw her work level drop.

She had been working an average of 33 hours a week, but in February and March, she averaged 17 hours a week, though she remained on the firm’s healthcare plan.

Harvey discussed the drop in work with her boss, Bruce Na­poli, and he was aware she was interviewing for other jobs.

She wrote and signed a letter of resignation, addressing the envelope to Napoli. The letter said she would be leaving in two weeks. He found the envelope on top of her desk on the evening of March 17. When she returned to work the next day, her desk had been cleared and her com­puter password had been changed. The employer terminated her that day. She received only two week’s pay past her termination. Virginia Code § 60.2-612(8) caps benefits to two weeks if an employee gives notice and the employer tells the worker to leave before the ter­mination date, as happened here.

In April, a commissioner at the VEC found she was disqualified from any further benefits. After nearly a year of appeals and findings at various levels both allowing and disallowing addition­al benefits, the case made its way to cir­cuit court for judicial review.

Brodie wrote that the narrow issue was whether Harvey had given notice.

The judge said that the outcome of the case hinged on two words in the statute – “given notice.” She cited dictionary definitions of those terms that indicate a desire to convey, bestow or deliver. The plain meaning requires an “employee to take some step of affirmative action.” She found no such act in the case.

Brodie wrote that it is relevant to ob­serve what Harvey did not do. She did not mail the letter. She did not hand-de­liver it to her boss or leave it on his desk. She did not have a conversation with him, offering a resignation.

The judge said she could not interpret the finding of the letter as “giving no­tice” because that reading would allow “one’s presumption of another’s resigna­tion to control whether an individual is entitled to benefits.”

She added, “[C]ourts should be hesi­tant to opening the door for employers to presume resignation and act without investigation.”

The judge found that Harvey had not given notice. She was “unemployed without fault on her part” and therefore the two-week cap on benefits did not ap­ply to her.