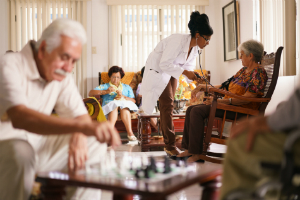 A Portsmouth judge has ruled that Virginia law prevails over the Federal Arbitration Act in a nursing home wrongful death case.

Until the court challenge to the new rule is resolved, the arbitration battlefield may grow quiet as nursing homes drop their insistence that negligence claims be diverted away from the courthouse.

In a wrongful death action against a Portsmouth nursing home, the home filed a plea in bar asking Judge James C. Hawks to compel alternative dispute resolution proceedings in place of litigation.

A lawyer for the home pointed to an Alternative Dispute Resolution agreement – separate from the long-term care contract – that was signed by the patient’s sister under a power of attorney.

The home said the sister was not required to sign the ADR agreement in order to have her brother admitted, but she chose to sign it.

Lawyers for the patient’s family said nursing home arbitration contracts often are forced on families when placing a family member in a home.

“They don’t really have much power to bargain. They truly are the weaker party in the transaction of the admissions,” said Eric K. Washburn of Virginia Beach, according to a transcript of a hearing on Sept. 22.

Washburn also pointed to a Virginia statute – Va. Code § 8.01-581.12 – which requires that arbitration agreements contain a 60-day opt-out provision for medical malpractice claims. The statute would allow a patient or a representative to withdraw from an arbitration agreement within 60 days after termination of the healthcare.

The Portsmouth patient’s arbitration agreement contained no reference to any such opt-out provision after the end of care, Washburn said.

“The agreement included a governing law provision, the Federal Arbitration Act, and it involved interstate commerce,” she told Hawks.

The judge was not receptive to that argument.

“I tell you, I don’t like federal preemption,” Hawks said at one point during the hearing.

“It sounds more like federal meddling to me,” the judge added later.

In his Oct. 19 opinion, Hawks held that the nursing home contract did not constitute interstate commerce, regardless of an assertion to the contrary in the agreement. He ruled the FAA did not preempt the Virginia statute requiring a 60-day opt-out provision.

“Although this case has an out of state corporate defendant, the corporation has qualified to do business in Virginia and must comply with Virginia laws in providing long term nursing care at a facility in this state,” Hawks wrote.

Moss did not respond to a request for comment, but a lawyer who often represents nursing homes said the Hawks ruling was an anomaly.

Nancy F. Reynolds of Roanoke said the judge “took the easy way out” after attorneys failed to flesh out their positions. Hawks did not clearly rule on the Virginia statute, she said.

Washburn agreed he was “kind of surprised” at Hawks’ decision, but he said judges are “somewhat torn” on the FAA preemption issue.

Two other circuit judges have ruled in recent years that the Federal Arbitration Act governs in nursing home cases, despite the Virginia 60-day opt-out provision.

Roanoke Circuit Judge William D. Broadhurst ruled the same way in a 2014 case. He said the Virginia statute “should be juxtaposed against the antipathy of the United States Supreme Court to state regulations attempting to single out arbitration clauses for special treatment.”

Courtroom battles over application of arbitration clauses could become a thing of the past with a new rule intended to take effect Nov. 28.

The Centers for Medicare Services – a federal agency – imposed a rule barring arbitration clauses in nursing home contracts. CMS invited comment on the arbitration issue and essentially ruled in favor of the plaintiffs’ position and against pre-dispute arbitration agreements for nursing homes.

The agency’s rule is backed by the power of the purse. Nearly every nursing home depends on Medicare benefits to pay the bills.

But nursing homes won a quick victory in a challenge to the CMS arbitration rule. On Nov. 7, a Mississippi federal judge issued a preliminary injunction barring enforcement of the ban on new nursing home arbitration contracts.

While U.S. District Judge Michael P. Mills agreed with the public policy behind the arbitration ban, he questioned the authority of the federal agency to make such a broad policy change.

“While there is undoubtedly a great deal of Congressional gridlock, Congress’ failure to enact positive legislation should not serve as an excuse for the executive branch to assume powers which are properly reserved for the legislative branch. It appears to this Court that the Rule enacted by CMS in this case crosses the line,” Mills wrote.

The government had not yet filed any response to Mills’ injunction as of Nov. 16.

In the meantime, Reynolds said she is telling long term care providers that, while she would be happy to challenge the rule in court for them, use of arbitration clauses after Nov. 28 could affect reimbursement.

“I do not expect the clients to buck the reimbursement system,” Reynolds said.